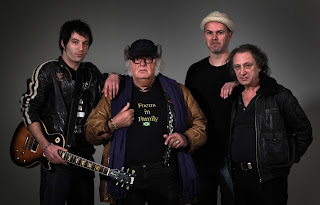 The first of the 'big gigs' at the Wycombe Arts centre will launch not only the new venue but 2013 itself in spectacular style, as the one and only Focus - Thijs Van Leer, Pierre Van Der Linden, Bobby Jacobs and Menno Gootjes- bring their annual dose of progressive neo-classical rock and roll mayhem all the way from Die Nederlands to South Bucks.

Expect probably the most riotous show ever performed by an all-instrumental band (bar the yodelling of course) featuring such joys as 'Focus 1, 2, 3 and 4', 'House Of The King', 'Sylvia', 'Black Beauty' and the inevitable 'Hocus Pocus'. The first of hopefully many touring shows to be performed in the Greater Hall of the Arts4every1 Centre (the former St John's Church). They've done 'gigs' before, but this is a true event!

Tickets are £17 in advance from Wegottickets, Ticketweb, Stargreen, Counter Culture and Ruby Moon.
Posted by Phil at 11:15
Email ThisBlogThis!Share to TwitterShare to FacebookShare to Pinterest