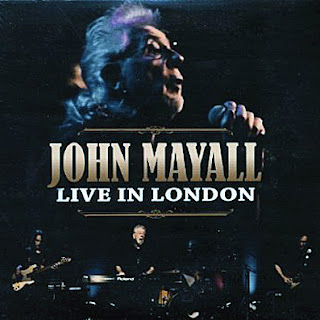 This was a hard choice to make - to see Thin Lizzy's "farewell" gig, or to see a man who's partially responsible for the existence of half the rock music in the world as we know it, who I'd never previously witnessed in the flesh. As you'll no doubt be aware by now, I plumped for the latter. Which is probably just as well, really, as I predict the Irish rockers' (or at least two of them's) soon-come rebirth as Black Star Riders or whatever they're called will last approximately five minutes before the agents realise they can't sell it and start baying for a return to the old brandname. It's also a wise choice because you wonder, at 79, how many more chances you'll get to see him. But also because at 79 he's still incredible. Quite extraordinarily so.

In some respects, there are few surprises to be gleaned from tonight's performance: the man plays the blues, or at least a galvanised, powerful brand of blues-rock, and that's exactly what you get. However, other things are definitely different: for one, despite their undoubted ability, not one of the bandmembers onstage with JM tonight are what one would consider 'virtuosi'. Nor are they, with the possible exception of bassist Greg Rzab (who wears his high slung axe with a certain insouciant cool) in any way particularly fascinating to look at, and secondly, (probably for that very reason) the focus is now very much on the leader himself rather than his sidemen.

Some would venture "about time too", and they may be right: perhaps it's been this way for a while, and, having not witnessed the live spectacle before, I just didn't realise. But, being honest, isn't Mayall the one artist in the history of rock music always destined to be better known for the people he nurtured, tutored and set on the road to stardom (in particular, Eric Clapton, Peter Green and the other founding members of Fleetwood Mac, and Mick Taylor) than his own, often incredible, achievements? Therefore, even if nobody of note has played with him for decades, you expect him to be surrounded by stars in the making. The fact that he clearly isn't, even if little more than a minor culture shock, is still enough to make you pause and reflect. That their pedigree is impeccable is without question - guitarist Rocky Athas is the former jamming partner of Stevie Ray Vaughan and an acknowledged influence on both Scott Gorham and Brian May, Rzab's resume includes stints with the Black Crowes, Gov't Mule and the Allmans as well as time spent in the band of practically every US blues legend still alive and performing between 1980 and the present day, and drummer Jay Davenport is a veteran of the Chicago scene of some 30 years standing. But for all that, they could be literally anyone up there. Their solos, while accomplished and technically flawless, ring with the smooth professionalism of the very circuits they belong to, but are decidedly lacking in personality or individuality. At least that's how they appeared to me tonight: maybe a few more days on the road in their sonic company might present a different picture, but for now, I have to call it as I see it. Sorry, chaps, and don't take it personally - I said the same about Johnny Winter's band three years ago. And at least none of you wore a baseball cap backwards...

What holds it all together, therefore, is the man whose name is printed on the ticket, a man who, as the promoter is keen to point out afterwards, is probably the only rock musician of almost 80 still doing this. You know what though - age be buggered. Mayall is stunning in any context: as either blues or rock singer, he's easily the equal of a Plant, Rodgers or Rod in their heyday, and deserves to be better known for it. Then again, maybe he was always too busy drumming inspiration into the minds of musicians to promote himself as the great entertainer he clearly is. Several vocalists of better renown now display half the range they once had, but Mayall's seems to have actually grown: on 'Help Me Baby' and that ironic paean to the teetotal lifestyle 'Give Me One More Day', his voice is amazing, while on the little-aired 'Heartache' from his debut album it simply demolishes, wringing the notes into submission. His reputation as raconteur and storyteller par excellence is also well deserved, with almost every number prefaced by one fascinating anecdote or another, told in the same laconic Mancunian drawl that could win over any audience of non-converts.

If all that weren't enough, his own guitar playing has now almost improved to soloist level, while his keyboard playing remains exemplary: not only in a technical sense, but also in his choice of textures. 'California', from my second favourite Mayall platter The Turning Point is given a subtle, jazz-inflected treatment that more than respects the album version while refusing to regurgitate, sporting velvety vibraphone tones worthy of Milt Jackson, while 'Nature's Disappearing' (from my very favourite, USA Union) now re-emerges with a heavy-rocking, organ-drenched approach. True, the violin of Sugarcane Harris can never be replaced, but I wasn't expecting it to be: trust me, I've seen many a 'legend' ruin their back catalogue with unnecessary instrumentation, and at no point tonight does Mayall do this. Until the climax of the show anyway, when, after allowing us the deep breath of faultless, traditional blues that is 'They Call It Stormy Monday', we are dragged kicking and screaming into the fray with a frenetic rendition of another Turning Point highspot, 'Room To Move'. For three minutes, Athas' guitar twangs like it was still 1969, the rhythm section (nonexistent on the original) provides a suitable flurry of scattercushion funk, and Mayall's own harmonica playing - frenetic, earthy and warm - is a wonder to behold. As is his loose-limbed, very Northern, laconic onstage persona, egging his charges on with enthusiastic cries of participation. Truly inspirational. Then, just when they've got us in the palm of their hand, they ruin it. Well, almost. All it takes is one meander down the wrong path of indulgent show-off drum soloing, one slap bass line too many (actually, unless you're Stanley Clarke or Colin Hodgkinson, one is ALWAYS too many) or the tiniest inkling toward the more 'chartered accountant' end of widdly for a blues band to blow it - and JM and his crew somehow manage to do all in the space of five minutes, losing the entire song somewhere in the resulting melange.

Don't misunderstand me, I love self-aggrandising, pompous, widdly prog soloing, and I've been listening to it for years, but you don't expect to see John Mayall do it, especially when the rest of the show has existed quite happily without it up to this point. Then again, he did say it was the 'grand finale' piece, and once the melody returns it does end on a suitable high note, but a little more restraint wouldn't have gone amiss. Thankfully, it's a minor blip and by the time the band return - first to swop instruments, then to threaten each other jokingly with them whilst fighting over who's going to get to introduce their leader and mentor, and finally to bow out gracefully with, what else but a swinging run through Freddie King's 'Hideaway'. All is forgiven, if not necessarily forgotten. Especially when you consider how, after BB King, who similarly seems to show no interest in stopping anytime soon, Mayall is almost definitely (let me know if you know otherwise) the next oldest man alive still playing in the genre, which is why you MUST see him if possible. White and British he may be, but, naysayers, that shouldn't rob him of his place in the pantheon - and for that very reason, I feel inclined to correct a line in my second paragraph. The man doesn't play the blues, nor has he got the blues: he IS the blues.

DARIUS DREWE SHIMON
Posted by Phil at 09:15
Email ThisBlogThis!Share to TwitterShare to FacebookShare to Pinterest