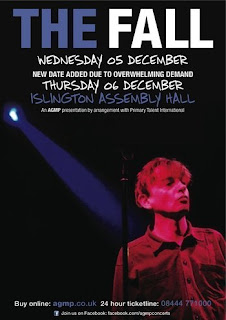 In a way, it's surprising to see The Fall play in the Assembly Hall's grandiose environs: not because they can't fill it (this is the second of two sold out nights, and for once, there isn't even a new album to plug) but because in its architecture, location and appearance, it's probably everything Mark E Smith is diametrically opposed to. Posh, plush, surrounded by yuppie bars and simply dripping with Southernness, it's Olde London through and through (much like most of the adjoining streets) and would never be found in Salford or Manchester. But IS it? On second glance, its red carpeted halls and wooden floor bear all the hallmarks of an ancient Lancastrian gin palace or pier theatre beloved of the variety business- so, in many ways, for Smith- the gurning, grimacing Frank Randle of rock'n'roll- it's his ideal home.

It also has an incredible PA, which, from the top row of the balcony, sounds as dense, brain-smashingly heavy and yet crystal clear as such complex, multi-layered music requires. Smith, with increasing support from keyboard-playing, occasional lead vocal-taking wife Elena, has a reputation (one of many!) for drilling his young musicians to near-crack precision, something which has earned him the nickname more than once of the 'indie Zappa', and the current line-up are no exception. Faceless they may be to look at (although, when they start the show with a 5-minute instrumental prefacing their leader's faux-disinterested entry, you have to) but they are enthralling to listen to. According to Wikipedia their names are Dave Spurr, Peter Greenway (no, not the filmmaker) and Keiron Melling, but this, or the matter of which is which, is largely unimportant as he'll have sacked the lot of them by the time there's an new album out anyway. The guitarist's bloody good though.

It also makes no difference whatsoever that half the material tonight is either extremely recent or, more than likely, brand new (MES spends half the night sat behind the bassist's monitor in a leather armchair, reading what are obviously freshly written lyrics from reams of foolscap). It still comes on like Beefheart being fellated by members of the Amon Duul collective while Link Wray plays along in the background (like all their best material does) and bodes well for their next release. So that's alright then. Whether this looks as good, though, from downstairs is a moot point: they probably can't see him, but then again it's so rammed down there that many of them still couldn't if he was standing up. Is he pissed? Probably, but in fine shape, bellowing incomprehensible lyrics (not because of any drunken slurring, but because they hint at an intellect and mindset most people can't even begin to grasp), strutting and lurching all at once, and belligerently leering his snook at an entire audience which he appreciates the devotion of whilst simultaneously holding their every floppy haired or shaven headed, studenty post-punk cliche in utter contempt, before heading off home to sit in an armchair listening to Peter Hammill and Joe Meek and watching Nigel Kneale plays. That's fine, it's exactly what I do. Mind you, he'll probably kick my head in for writing this as well - if not for attempting to understand him, then at the very least because I have long 70s hair, come from Essex and live in Buckinghamshire.

An early appearance of the Sonics 'Strychnine' roars and rages like a lion with its nads caught in a large metal thingy, soon followed by Elena taking strident lead vox on 'I've Been Duped'. While the missus takes centre stage, hubby meanders 'twixt amps and cabs, twisting a little here, turning a little there, fiddling with knob after dial after lead after knob in the manner only he and Gibby Haynes fully understand. But, never one to settle into comfortable routine, he's recently taken to doing it with his own amp too, often whilst singing. Perhaps the arch-sadist of garage punk has a masochistic side after all. It certainly isn't because he's run out of ideas: while there may be a definite lull in the centre of the set, leading some to head towards either bar or bog, it's only in terms of pace, with the fuzz-laden doom of one (again seemingly brand new) track soon followed by another steeped in Lamonte Young-esque concrete drone and non-percussive yet rhythmic looping. He's back on the chair for these, then he's up again for what seems the closest you'll get from such a cantankerous and deliberately obtuse musician to a 'hits section', with 'Weather Report', 'Container Drivers', 'Reformation" (only six years old and already an old favourite), 'Mr Pharmacist' and 'Blindness' thrudded out in rapidfire succession, during which 25-minute time period Smith manages to not only destroy his own mikestand but entangle the rest of the group's leads in it. The old devil. This doesn't prevent Elena from squatting haunch-down on the floor and bellowing into it to commence the encore: yes, the most awkward band in the world even do them sometimes as well. Her shrill cry of "IS ANYBODY THERE?" can only mean 'Psycick Dancehall', a trip into the murky 79-80 vintage even I didn't expect, followed by a blunt, heads down 'What About Us' before, 80 minutes after it all started, it's all ended.

What did you expect, a ballad and an acoustic number? If you did, you were clearly at the wrong gig, although I find it very hard to believe that anyone here harbours such ideas. A friend of mine once told me he chooses to tell 'the story' at the dinner table during Passover each year in the hope that one day he'll remember it properly and get it right: in much the same way, we come to see The Fall year in year out in the hope that eventually, we'll work out why we like them. I'm still fathoming it myself- in one respect, they're the most predictable band ever, who still sound, 35 years on, like the combined ouput of the pre-punk era's most aggressive psych or prog bands all played at once on several rusty car stereos with occasional interference from low-frequency C&W, rockabilly and oldies stations. Their jarring, scraping backbeats suggesting a dozen possible directions yet always returning to point of departure, overlaid with the barked vocals of a meths drinker from a nearby bus station who looks a bit like Bill Maynard if he hadn't eaten for a fortnight. That much we know, and that much we come to see on a yearly basis. That much we wouldn't have any other way. Where the mystery lies is in how they'll do it, how long they'll do it for, whether you'll recognise it when they do, exactly what it's all about, and in what strange new key, beknownst only unto Mark E Smith himself, they'll do it in. And in that respect they will remain perpetually rock's most fascinating puzzle, in which the pieces will never fit and were deliberately not designed to.

Rarely in the last ten years have they sounded mightier.

DARIUS DREWE SHIMON
Posted by Phil at 11:15
Email ThisBlogThis!Share to TwitterShare to FacebookShare to Pinterest