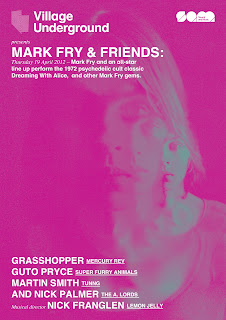 As I stand outside the entrance something suddenly occurs to me: Mark Fry, for someone who only made one, relatively obscure, album in 1972 and then disappeared into even further obscurity, sure has one hell of a lot of fans. I’ve seen several ‘legends’ from the psych-folk netherworld betwixt 1967 and 1973 rise from the grave, and with the exception of Comus, the audiences have been as minimal as one may imagine, but it looks like everyone is here tonight- everyone except the other bloke on my guest list, that is, and it’s bloody freezing. Oh, no, hang on, here he comes.

However, once safely ensconced inside the VU’s freshly painted brick arches and greeted with the sight of a healthy, dignified and surprisingly young-for-60 Mr Fry taking his first tentative steps onto a stage for nearly 40 years, it all becomes glaringly apparent: he’s gone and got himself an all-star backing group. Right, that explains it. There’s Grasshopper from Mercury Rev, a stray Super Furry Animal, a Lemon Jelly personage and two (I believe) of Liverpool’s finest folktronic collective, Tunng: all we need would be at least one of Grandaddy and we’d have the world’s biggest international onstage Brian Wilson fan club. In London on this night, that is. But you know what? They’re obviously all members of the Mark Fry fan club too, and it’s a testament to the man that his name, and that single, ethereal album, carries so much weight after all this time that star players from across continents are prepared to get together to back him. They obviously went to some great parties in their youths.

“Dreaming With Alice” the title track from that album once edited into tiny snippets betwixt its lengthier brothers, is now delivered as one entity, and drifts as ethereally over the assembled throng as I had hoped it would. What’s more, with a full band of guitar, stand up bass, drums, keys, violin and sax (several players doubling up, swopping and chopping as the song befits) what were once slight, almost airy compositions, such as “March On My Brother” and “Roses For Columbus” are now transformed into shuddering, shimmering post-shoegaze oceans, realising maybe the arrangements Fry would have aimed for back in ’72, akin to those of his obvious rolemodel Donovan, had the budget allowed.

But of course, it’s not just about that album- he has released two more in recent years, several selections from the latest of which, I Lived In Trees, are delivered tonight with equal majesty and aplomb. There’s always a danger when an artists announces “this is off the new album” that the audience will make a beeline for the bar, and there’s even more of a danger, when that artist comes with the baggage of a “cult legend” that ties them to a former decade, that the song will be shit: fortunately this is never the case with Fry’s new material, which, whilst removed from the ‘hippy flower child’ trappings of its predecessors, still possesses the same ‘cosmic’ otherworldliness, in particular on ‘La Lune’ and the title track, that gave it its identity. Judging by the audience’s rapt response they are similarly impressed: you can always tell it’s a good gig when you don’t get the urge to nip outside for a fag halfway through.

Similarly, despite the lugubriously gentle pace of much of the material (my plus one remarks to me at one point that this is the most un-testosterone filled performance he ever saw a man give outside of a John Howard gig), the audience, from the hip indie kids to the older folkies that were there the first time, resist the urge to sit down, even in a venue with a climate stuffy enough to melt the iceberg that sank the Titanic. Their patience is subsequently rewarded when Fry and his assembled sonic explorers launch into a frolicksome ‘Mandolin Man’, even indulging in a spot of psychedelic jig-dancing, before assaulting us with a pounding uptempo space-drone reworking of ‘The Witch’ that achieves the near-impossible by outclassing the original.

Sometimes, I guess, it’s still wise to expect the unexpected- such as the final encore, prefaced by jokes about “coming back from the scenes of excess in the Green Room”, of ‘Lute And Flute’- the one song from Alice I thought he wouldn’t play but secretly hoped he would. Twee it may be, but it also serves as reminder of why this peculiarly English folk outsider from the past, with recordings almost as wispy and peripheral as the man himself, further isolated at the time by recording and only promoting his album in Italy, has intrigued so many of us to the point where he once again has a future that has the potential to cross continents.

Seemingly touched, not to say surprised, by such a positive reaction, our minstrel humbly slips back into the shadows from whence he didst materialise- but not for the last time. OK, Trevor Bilmuss- your turn next. Make yourself known to us.....

Posted by Phil at 12:26
Email ThisBlogThis!Share to TwitterShare to FacebookShare to Pinterest