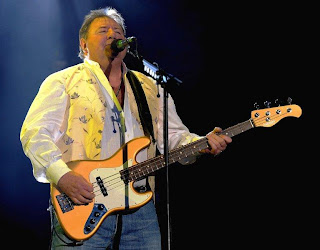 
Allegedly, "the three worst things that can happen to you on the road are earache, backache and Greg Lake". So quoth one of his erstwhile bandmembers after his short tenure as frontman for Asia in the early 80s. No, the worst thing that can happen to you is getting stuck in a rain-drenched bus station in Hemel Hempstead on a Sunday night with a knackered mobile phone and a braindead Chavette yelling in your ear en route to a gig, resulting in your arrival some 35 minutes later than planned. Still, at least that means that, although I've sadly missed 'From The Beginning' and '21st Century Schizoid Man', I've also been spared a rendition of 'Heartbreak Hotel'. Our Greg, you see, is revisiting his entire life in words and music, and this not only includes songs wot 'e wrote or recorded, but ones he loved in his formative years. His decision to perform the first Crimson album in almost its entirety therefore makes sense (although none of the songs are technically his) but his hesitant semi-medleying of 'In The Court Of The Crimson King', 'Epitaph' and 'I Talk To The Wind' into each other makes less, especially when the beatific quietude of the last-named is unsuited to the booming tone of his now considerably deepened vocal. Ironically, Lake seems to have inherited the baritone range once possessed by Scott Walker, whereas Scott's voice has stretched further with age into the utter stratospheres. Did they ever meet and do a swap, perchance?

Covering the Beatles' 'You've Got To Hide Your Love Away' seems to be everyone's choice these days, but there is an incredibly self-effacing and humble element to seeing it covered by someone who also once filled Shea Stadium and whose ego was once rumoured to be roughly the same size in area and diameter. There's none of that onstage tonight: just a likeable, warm and immensely talented man (albeit still stood atop a magic carpet, but nowadays, the show wouldn't seem complete without it), supported only by backing tapes, playing the songs he loves on guitar, bass and piano with heartfelt passion and sharing candidly honest stories in a West Country burr undimmed by years resident on the other side of the Atlantic. He even turns the mike on us for awhile, asking for questions: as would be expected, they range from the perceptive to the utterly braindead (like the bloke who asks how Crimson came up with the title 'Larks Tongues In Aspic', a song written three years after he quit the band) but his replies are never less than perceptive, informative and full of revelation - particularly when I ask him about the pre-ELP band that never was with Hendrix and Mitch Mitchell. The "gun on the table" anecdote is priceless in itself, but I'll let him tell it, should he ever come round your way again.

Hopefully he will, as this was an immensely enjoyable experience, for once assisted (rather than hindered) by the intimacy of turning the Empire into a seated venue for the evening. By contrast, 'Touch And Go' is as big, butch and bellicose as it ever was in the 80s, but a bucolic, acoustic guitar treatment of the first half of 'Trilogy', seguing neatly into 'Still You Turn Me On', is sublime indeed. A cursory glance down the setlist might provide cynics with ample grist to their claim that "he does too many ballads", but to me, that's only a problem if you're expecting a hard rock show, and this was never meant to be that. Sadly that means there's nothing from Manoeuvres on offer, but hearing 'C'Est La Vie', originally released on the underrated second side of the otherwise self-indulgent Works Vol 1 and later a No.1 French hit for Johnny Hallyday, in this setting, stripped of the padding added by Lake and Palmer, reminds the informed listener that Lake's own songs, at their best, have less to do with prog itself, or indeed any kind of rock, and more to do with the genreless standards of Bacharach, Barry and Brel. Something which his association with arena pomp has unfortunately done its best obscure for many years.

If, alternatively, you want reassurance that the Bournemouth boy is still a rock'n'roller at heart, then his bone-snapping treatment of Johnny Kidd's 'Shakin All Over'. Again, an obvious choice to some, but you have to remember how exciting this must have sounded to the teenage Gregory on the radio in 1960, and indeed to everyone of that age, at a time when there was no psych, garage, freakbeat or even beat, just a hitherto sonambulent England finally waking up to the power of the electric guitar. Likewise 'Lucky Man', the best known ELP ballad (and allegedly the very first song Emerson ever used a Moog on) was actually written that long ago, before he even joined a band: a solemnly thankful take on Curtis Mayfield's 'People Get Ready' also reminds us of those days when it was possible to dig rock and soul in equal measures without having to worry about the hems of your suit or the length of one's haircut.

It does, end, of course, on full-out prog thrust, with 'Karn Evil 9 2nd Movement'. A strange choice considering it's actually a song celebrating the start of a show, but there's a wry glint of humour in this that he's as much aware of as we are, as we all know, at this late stage in the life of rock music, that the show will continue as long as those who wish to play it remain. Given the choice, I'd prefer it not to be on a Sunday night when several tube lines are out of service, and to start a little later than 8pm, so I might have some chance of seeing the show "from the beginning", as it were. But ultimately I was thankful to have been there at all, as, while it would be unfair to assume Lake is seeking some closure to his career, it did seem very much like a unique performance from someone who won't offer us such rare pleasures again anytime soon. Those (and there were many) who turned down my offer of a plus one have much to regret.

Darius Drewe Shimon
Posted by Phil at 14:10
Email ThisBlogThis!Share to TwitterShare to FacebookShare to Pinterest