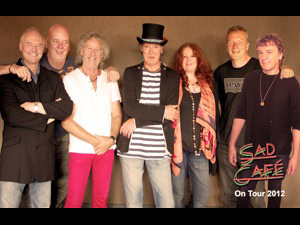 There's no easy way to say this: this is a terrible turnout for such a great band. Even if you've been away for nearly 30 years, and it's well-known that your original vocalist sadly passed away some time ago, you surely could still expect more than 150 people to come out to see you. In fact, if anything, there should be more people eagerly awaiting your return. But sadly, the Islington Academy, which their agent freely admits to me is aesthetically the wrong venue anyway, is only a quarter full, and it shows.

Not that it's any way going to deter them, though. From the carefree, cheerful and, dare I say it, "rawk n rawl" manner in which long-term members Ian Wilson, Ashley Mulford and Des Tong amble onstage, be-suited, be-hatted (as is new guitarist/vocalist Steve Whalley, who resembles a cross between Sylvain Sylvain and a stray Ozric Tentacle, and at least partially fills late Paul Young's role with confidence) and oozing bonhomie. And once under way, you remember why you're here - because nobody else quite pulls off the heady brew of powerpop chops, pub-rock brawn and polished yacht-rock/harmony soft-rock dexterity that the Cafe do. Not in the UK at least. Sure, in the US, that kind of stuff ruled the airwaves for most of the late 70s, which is presumably why they (and Supertramp, and Sniff And The Tears, and City Boy, and Gerry Rafferty, and....) spent so many years there. But over here it's been sadly airbrushed from history, except in the 'ironic' playlists of Will Ferrell-loving Shoreditch DJs and cheesefest gatherings of clubs like Guilty Pleasures and Prom Night. Needless to say, none of those people have bothered to show their genuine appreciation of the genre tonight by turning up. In the words of Rowan Atkinson's disgruntled vicar, "WHERE WERE ALL YOU BASTARDS THEN?"

But I digress. The true believers that have bothered to show (some of whom have even made their own t shirts) are enraptured and enthralled, and so am I. By the time the opening chords to 'Strange Little Girl' appear suddenly three songs in, I can't stop bouncing. The four-man vocal frontline is also amply aided by keyboardist Sue Quin's feathery tones, and on the likes of 'Fanx Ta-Ra', a nod to the band's proggy origins that I am ever grateful for, she proves herself no slouch on the lead vocal front either. Ashley Mulford, who apparently has flown in from Denmark to rejoin his former bandmates is also a revelation as a guitarist. I mean, I know he sounded this good on record, but to actually witness him is quite incredible. Never before has a man who looks so outwardly humble projected such flawless fretboard fingering, like Salford's very own personal Santana. Though this is not an issue of Classic Rock Presents Prog, so I shall refrain from further indepth technical delineation of his abilities, especially when the whole point of a band like Sad Cafe - or indeed the many unsung contemporaries that existed in that nebulous netherspace 'twixt prog, glam, AOR, pub rock, soul and the onslaught of punk - was that the song was always more important than its constituent parts.

And, verily, that it is: 'Restless', 'Emptiness' and 'My Oh My' all bear the stamp of superior construction, just as you would expect from any band who sprung from 10cc's infamous Strawberry Studios stable, with the bubblegum tinge one would expect from such a background still evident on the uptempo, spiky 'Rat Race' and even that hit single. Yes, 'Everyday Hurts' may be ubiquitous, heard on every FM oldies radio station from Dorking to Dubai, but seeing it in the flesh makes it all the more evident why. Its overlapping harmonies, chord changes and blue notes evocative of the Walker Brothers or the Foundations at their best. It's just a shame that it's still, after 30 odd years, the only song people remember this fine outfit for, when there are so many others equally worthy of attention. Although sadly, two of the greatest, 'Keeping It From The Troops' and 'Run Home Girl' are omitted tonight. And don't get me started on 'Cottage Love'...

There is definitely mileage to be had in Sad Cafe's return to the road, which was always their natural environment, as captured on their seminal live double album from 1980 which I hear they are planning to record a follow-up to. What needs to be addressed is the matter of the correct surroundings, and some kind of angle to interest more than just a smattering of diehards in rediscovering their greatness.

DARIUS DREWE SHIMON
Posted by Phil at 16:18
Email ThisBlogThis!Share to TwitterShare to FacebookShare to Pinterest