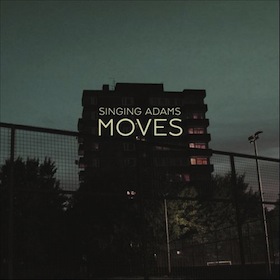 Singing Adams is the vehicle for Steven Adams, formerly of The Broken Family Band. This, the group’s second album, is a loosely connected suite of songs related to modern life in London: not the most original concept, one might reasonably claim.

However, Adams finds something fresh in Britain’s over-exposed capital city. He does this by being what could be termed ‘old-fashioned contemporary’. His subjects are up-to-date, and include two mediations on the 2010 riots (‘Black Cloud’ and ‘London Trocadero’), yet his tart-but-humane songwriting style has a long lineage. Adams, rather than sitting easily with the current crop of indie troubadours, has more in common with the generation before him: the latest albums by The Weather Prophets’ Pete Astor and Gene’s former frontman Martin Rossiter are its bedfellows.

The jangle is solidly played, and it’s not solely serious reflection; in fact, Moves is at its best when it allows itself a certain cuteness, notably on the Belle & Sebastian-ish ‘Theme From Moves’.

Jeanette Leech
Posted by Andy Morten at 14:24
Email ThisBlogThis!Share to TwitterShare to FacebookShare to Pinterest