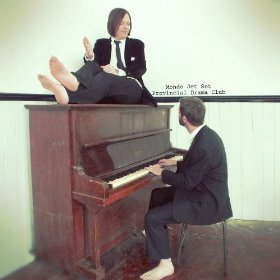 Double albums, eh? Isn’t the traditional reviewer response to say ‘well, this could have made a great single album’, and lambast the self-indulgence of the creators? Indie duo Mondo Jet Set seems like the least self-indulgent band going. Provincial Drama Club does offer 23 tracks, yet none top four minutes, and most come in under two. Boredom isn’t really an option with this particular double album.

Firmly in the C86 tradition of shambolic cuteness, the melodies are joyous, and the vocals are extremely appealing; the sweetheart male voice stays the right side of wet even when the music itself gets a little too cloying (notably on ‘We Are Having A Pyjama Party’). There’s also room for more strident songs, like the great ‘Moth Attack’ which recalls something from the late ’90s on the Kill Rock Stars label, and the rhythmic ‘Cadaver In Motion’, its New York post-punk aesthetic charmingly filtered through polite English delivery.

So, no – it shouldn’t have been a single disc. Provincial Drama Club is an album that deserves its running time.

Jeanette Leech
Posted by Andy Morten at 13:07
Email ThisBlogThis!Share to TwitterShare to FacebookShare to Pinterest